Death of an Initiative

During this week, the city quietly weathered a potentially serious crisis. Undisclosed financial problems caused the Cardiff Chamber of Commerce to shut down the operations of Cardiff Initiative, a company run in partnership with the Council, which runs the tourist enquiry offices, hotel booking systems, marketing and promotion of Cardiff as an international venue for sport, tourism and business, also the city centre management team. Thirty five staff were simply sent home on Friday evening, informed without ceremony by their CEO, Russell Goodway, former city Council leader, that the operation was being shut down and all were being made redundant. In effect they were shut out of their workplace - a decision to which the city centre manager Paul Williams took strong exception.
While he was absent from his office attending the meeting, all the computer equipment his team relied upon for their everyday work in keeping the city's commerce and streets humming smoothly was removed.. But that didn't stop them turning up and carrying on as usual, using their own personal equipment. Paul defied Goodway. "I'm not staying home", he told him, "I have a duty to this city, and it'll be business as usual no matter what you say." He was not alone in thinking that the way in which this affair had been handled was inappropriate and damaging to a successful enterprise. Financial problems in business organisations are not unusual when there have been large un-anticipated funding cuts. Senior management is there to defend their organisation, by every means possible other than dismantling. Admittedly nobody knows what went on the the background beforehand, the staff didn't. The idea that they might have been able to participate in tackling difficulties, rather than treating them as disposable commodities fails to commend Goodway's management style.
The Monday morning after, the Council's executive leadership team met with Initiative staff, re-engaged them all temporarily and re-deployed various parts of the operation in City Hall or the Bay. A new body is to be created to generate financial support for this work which essential to the success of Cardiff's hotels and businesses. The city centre management team are still in their offices, waiting for new computer equipment to be delivered, and getting used to the ramifications of being Council employees, at least for the next few months. I sincerely hope that Paul and his team's loyalty to the City is noticed and honoured. He has, of course, made himself vulnerable to vendetta should there be another change of political régime in the next decade. Let's just hope that Cardiffians will regard as un-electable anyone prepared to show inhumanity and ruthlessness in exercising public office.
Posted by Keith Kimber at 10:10 pm

I have been reading your "blog" for that couple of days ftom my place of exile in Dodge City, Kansas.

I have always felt that Lord Acton's dictum "Power corrupts and absolute power corrupts absolutely" certainly applied to Russell Goodway. His "Boss" style leadership of Cardiff has never been adequartly dealt with by the Cardiff Labour party.

Whe I stood for Ely (Libdem) his "team" put out a leaflet the the Lib Dems would set up traveller's camps in the Drope area. Not only was that not true, it was certainly rascist. I confronted Sue Goddard about it., She could not say anything.

I read this post with great sadness, but no surprise. That Goodway would act in such a way is in character.

Cardiff during his time was as close as resembling the "boss" style of goverment one finds in some parts of the US.

Russell Goodway does not deserve to be in any sort of elected office. 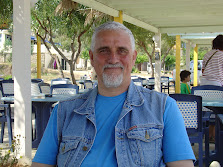 Keith Kimber
Born into a coal mining family in South Wales. Chemistry Graduate, Bristol University, Seminary in Cardiff. Ordained priest 1970. Career in urban settings, and education in mission and development. Pastorate in Geneva during '90s. Worked in Cardiff city centre parish from November 2002 until April 2010. Now retired, but active in different voluntary roles. Married, with one son, and two married daughters, each with a daughter, and a foster daughter with a son. Tweeting @keithkimber

Blogs & other places of interest